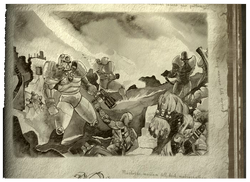 “Ah, the Codex. If it's in there, we have to abide it, if it's not, it's not important.”— Veronica Santangelo

The Codex is the constitution and set of laws for the Brotherhood of Steel.

Written and managed by the Scribes, the Codex acts as the building blocks and the very definition of the Brotherhood, and is a documentation of the entirety of its history, listing every piece of information relating to the organization, such as their doctrine, ranks and their responsibilities, members, tactics, and much more. The personal principles and idealism of Roger Maxson are also contained within.

The Scrolls are an important area of the Codex, and cover the lives and deeds of all Brothers, and its upkeep is the duty of the head librarian of each Brotherhood installation. The information held in the Scrolls can be a member's biography, contributions, the battles they partook in, kills, promotions, technological discoveries, and their death to name a few.

Retrieved from "https://fallout.fandom.com/wiki/Codex?oldid=3141606"
Community content is available under CC-BY-SA unless otherwise noted.