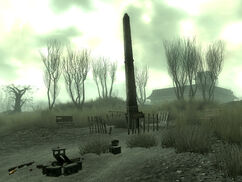 The coastal monument, also known as the Blackhall Needle is a monument west of Blackhall Manor. It honors Captain John Smith who discovered Point Lookout in 1612.[1]

It features a central obelisk with a commemorative plaque and some benches. There can also be miscellaneous items nearby as well as at the other relatively close campsite and dock areas. This area may at times be infested by swamp ghouls.

The coastal monument appears only in the Fallout 3 add-on Point Lookout.

Retrieved from "https://fallout.fandom.com/wiki/Coastal_monument?oldid=3495647"
Community content is available under CC-BY-SA unless otherwise noted.