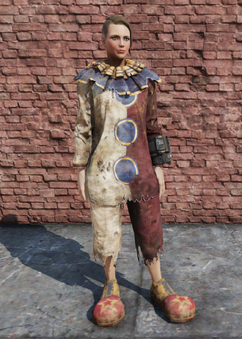 The clown outfit and clown hat are an outfit set in Fallout 76.

A clown costume featuring large red and yellow shoes, shorts and a shirt split into red and white halves with three large blue circles down the middle. The costume is topped by a blue and a yellow frilly collar. 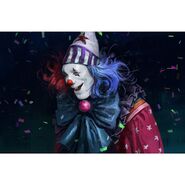 Concept art by Katya Gudkina
Add a photo to this gallery
Retrieved from "https://fallout.fandom.com/wiki/Clown_outfit?oldid=3361307"
Community content is available under CC-BY-SA unless otherwise noted.