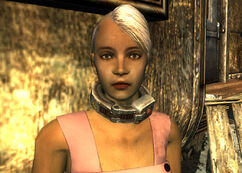 Clover is a slave held captive in Paradise Falls and possible companion in the year 2277.

Clover is a prostitute, one of two caught and pressed into slavery by Eulogy Jones a few months before meeting the Lone Wanderer. She along with Crimson are abused by their master, and attempt to stay out of his way. They will not talk to strangers. When Eulogy is not present, they will speak with one another, usually to bicker.[1][2][3] Eulogy claims that she is one of the craziest girls he's ever seen which makes her perfect as a bodyguard because she's "crazy in-love with whoever holds her leash."[4] She can be found inside Eulogy's pad or following him around outside.

Clover appears only in Fallout 3.

Trading certain headgear to her will cause her to wear it, but when you remove it from her inventory it will become a "default" piece of gear. Other headgear may be given to her to replace it, and she will wear it as normal, but as soon as you remove said headgear from her she will revert back to the previous headgear. It has been confirmed with the stormchaser hat and eyeglasses. [verified]

Retrieved from "https://fallout.fandom.com/wiki/Clover?oldid=3430903"
Community content is available under CC-BY-SA unless otherwise noted.