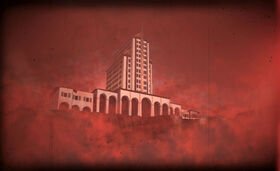 “The Cloud is what blankets the sky here... you may smell it in the air, copper and sulfur... burns the lungs and seeps into the skin.”— Father Elijah

The Cloud is an airborne toxin, spewed over the dead city of the Sierra Madre by the air conditioning and climate control systems inside the Sierra Madre Casino & Resort. Over the years, the Cloud has only grown into a massive blood-red fog that blankets the entire Sierra Madre.[1]

Created as an experiment by the Big MT execs, the Cloud is a product of the Z-43 innovative toxins plant located in the crater. When Frederick Sinclair came to Big MT for technology to purchase for the Sierra Madre, he unwittingly signed a Faustian pact: Apart from holograms and matter recombinators, the Think Tank would also place the Cloud at the Sierra Madre, using the casino, villa and its inhabitants as guinea pigs in its experiments.[2] Sinclair likely saw no other way to get the technology he needed, as he was already teetering on the brink of bankruptcy when he started negotiating with the executives. Of course, he was not informed that he would be receiving more than just harmless prototypes.[3] The Sierra Madre was the only testing ground that was protected by the Cloud, which was hardly a prize.[4]

The Cloud manifested itself for the first time when the cheap villa ventilation system ground to a halt, a victim of cutting corners and Mr. Yesterday's dubious practices. The pipes backed up, spewing out the red cloud. Workers in the area started choking and vomiting. Hospitalized in the villa clinic, the damage to their health was extensive enough to put them out of commission for good.[5]

To deal with the problem, Sinclair negotiated with the Big MT executives for yet another technology: The Darklight hazmat suits.[2] Although considered creepy by the maintenance crews, they allowed the crews to explore the ventilation system and try, in vain, to identify the source of the Cloud.[6]

The teams managed to find the source of the problem in the main ventilation pipe. However, traces of the dust cloud were present and eroded the metal of the suit's locks, exposing them to the Cloud and sealing them within.[7] The crewmen retreated and headed to the villa clinic to get medical attention. Much to the displeasure of the attending physicians, they cut themselves out of the suits with steak knives.[8][9]

However, despite the problems, the ventilation system was eventually restored to barely functional order. When the Great War hit shortly afterward, it continued to work for a few more years, before finally giving up the ghost. The Cloud gradually seeped into the area, climbing out of the damaged vents, eventually blanketing the area, blotting out the sun.[10][11] It became a grim, uncompromising guardian of its secrets. The maintenance crews who donned their hazmat suits and tried to fight it, succumbed to its effects, mutating and becoming the violent, savage guardians of the Sierra Madre.[12]

For centuries, the Cloud protected the casino and the villa, killing scavengers or weakening them so that they would become another victim of the tribe inhabiting it, the hazmat suited ghost people. It wasn't until the 23rd century that it became important once more. Father Elijah, a disgraced Brotherhood of Steel elder, learned of its existence from Ulysses. It inspired him.[13] When preliminary samples taken from air on the edges of the Sierra Madre yielded promising results, he set up a chemistry set to allow it to replenish itself and traveled to the Madre in person, to perform research onsite.[14]

Upon further research, Elijah decided to weaponize the Cloud as a weapon of mass destruction, to wipe the slate clean. It was intended to be used to reclaim the Mojave and destroy the New California Republic. He also plans to use it as an offensive technology, unleashing it upon the Mojave, cutting it off from the rest of the world. He could then use modified REPCONN rockets to push out both the New California Republic and Caesar's Legion at Hoover Dam, and finally, let traces of it drift west to NCR territory.[15][16][17]

“The alloy that makes up the Pre-War kitchen knives is unknown, and seems to have decayed in contact with the toxic cloud.”— Loading screen

The Cloud is a self-replicating[14] airborne toxin that's poisonous to living beings that causes a noticeable burning sensation in the lungs and can even enter the body through the skin.[18] It is blood red in color,[19] with the consistency of a dust cloud.[5] It smells of copper, Old World gold,[20] with a tinge of sulfur.[18]

The lethal dose depends on the concentration. People outside sheltered locations in the Sierra Madre are exposed to low concentrations of the toxin. The effects include trouble with eye focus, dizziness, coughing fits,[22] choking, vomiting[5] and general deterioration of health as the toxins enter the system through the lungs and the skin. Unless the victim treats the damage or leaves the area, exposure is eventually lethal. For this reason, sleeping outside is a death sentence.[23][24][25]

Concentrated pockets of the Cloud are outright lethal as they directly attack the body and cause necrosis (decay). While some can survive the concentrations of the cloud for some time, if healthy enough, none can withstand its effects for long. This is made worse by the fact that there is no protection against the Cloud. Rebreathers, chemical suits and other means of protection are useless as they fail when faced by the Cloud.[26] As damaging as the Cloud is to living beings, it preserves dead matter almost perfectly. Well built structures can last centuries intact.[27]

One effect of the Cloud is the effect it has on people wearing the Darklight hazmat suits. While outright exposure to the Cloud kills, when filtered through the suits, it apparently changes the physiology of the victim, mutating them into something else. These ghost people stalk the Sierra Madre, still wearing their hazmat suits, and are extremely tough to kill. Damage can render them inert, but the Cloud outside and that trapped within their bodies, in pockets,[28] will eventually regenerate them. Only destroying their limbs, head or destroying the body entirely (disintegration, molecular destabilization, etc.) will permanently kill them.[29]

The Cloud's concentrations can be fashioned into consumables.[30] When boiled and distilled into a liquid form, mixed with pre-War potato chips, it becomes a disgusting concoction that has an invigorating effect.[31]

In Hardcore mode, the Cloud slowly poisons the player character at outdoor locations of the Sierra Madre, dealing three health damage every 20 seconds. This will not occur in indoor locations or if the player is below 10 Hit Points.

Dean Domino's Unclean Living perk gives you 5 seconds before taking damage and reduces that damage by 25%, but prolonged stay is still not advisable. Completing the add-on will also remove the health deterioration in Hardcore mode, though concentrated pockets of the cloud will still poison the player character.

Large concentrations of the Cloud block off areas of Puesta del Sol and Salida del Sol. The former can be cleansed at the Puesta del Sol switching station during Mixed Signals. The latter area can be cleared by using the terminal near Dog's position and resetting the fans.

The Cloud appears in the Fallout: New Vegas add-on Dead Money and is mentioned in a Y-17 medical facility terminal in Old World Blues.

Approach to the switching station before resetting fans 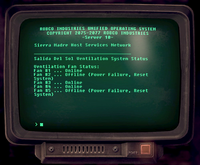 Approach to the switching station after the fans are reset 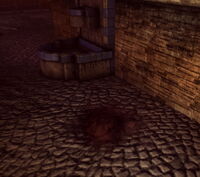