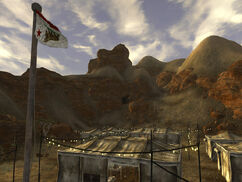 “It started about six months ago. At first it was just supplies going missing - we figured it was refugees. Then people started dying. Always a single bullet to the head, always from extreme range. We've lost eight refugees and three soldiers to this son of a bitch. We know he must be hiding out in one of the caves up in the mountains, but I don't have enough men to send out looking for him!”— Captain Gilles

Climb Ev'ry Mountain is a side quest in Fallout: New Vegas.

Head down to Bitter Springs which is located east of the Brotherhood of Steel safehouse. follow the road east of the New Vegas Medical Clinic all the way, Bitter Springs should be just to the north near the end of the road, when the road curves north. Talk to Captain Gilles who should be located in a tent behind the infirmary up the slope to the back of the town. Ask her about Bitter Springs and she will mention that someone is picking off her people at night. Pursue the issue, and she mentions that 8 refugees and 3 NCR troopers have been killed, always by a single bullet to the head. She knows the assassin is hiding up in the caves somewhere but she doesn't have the manpower to go searching for him.

After conversation, the quest marker points to an area slightly northwest of Bitter Springs, almost directly east from Bloodborne cave. The easiest way to reach this place is to head up behind the NCR tents until one reaches the second Great Khan supply cave. Facing the entrance, hug the wall left of the cave and head back towards Bitter Springs. You should be unsuccessfully climbing a steep hill. Soon enough one will be able to fall onto a large rock attached to this hill. Get on the rock then continue trying to climb the hill while moving forwards and falling down onto some more rocks. One will reach flat ground after the rock and can head towards the marker. There will a valley full of some small rocks. Hug the right wall of this valley to get to slim opening in 2 large, gray rocks. Also, Upon reaching a rock that has a small tree growing on it, look directly to the north and the opening leading up to the cave should be visible.

Alternatively, an easier way to get to the cave is as follows: North of Coyote Tail Ridge, there is a Great Khan graveyard. Facing west, run up the hill, turn north upon reaching the top, and head straight to the cave.

If Bloodborne cave has already been discovered, go east from it and search for a Coyote tobacco chew bush. It should be almost on top of the quest marker. Looking up hill, there will see a path going up, this path leads to the cave.

Once inside the cave, a Great Khan known as Oscar Velasco will talk to the player character after setting a few steps into the cave. If one is disguised as NCR or have Boone as a companion, he will shoot on sight. Picking the first conversation option will immediately turn him hostile. Asking him if he is the assassin will get him to divulge his opinion of the "refugee camp". He reveals that he is trying to exact revenge upon the NCR for killing his family during the Bitter Springs massacre. The player can choose to tell Oscar they will kill him which will force combat; killing Oscar will grant good karma (since he was killing civilians) but infamy with the Great Khans. Passing a speech check of 50 will allow one to persuade him to either leave peacefully or exact revenge upon the people responsible: the NCR. The latter will see him run off to Camp McCarran and undoubtedly get killed, resulting in bad Karma. The best option is to persuade him to head back to Red Rock Canyon. He will provide a key which unlocks the gates in the Great Khan Supply Caches located around the mountains, also resulting in good Karma. If one spoke to Oscar, returned to Captain Gilles and told her of Oscar, then speaks with Oscar again and fails the speech check of 50, there is an option to tell Oscar that you promised the captain to put an end to the attacks. Oscar will say that the player must kill him to stop the attacks and asks why he should even let the player go since they could inform the NCR of his location. This forces a speech check of 25 where one can tell the truth or lie that they will not reveal Oscar's location (unknown what difference lying vs telling the truth makes).

Head back to Bitter Springs and talk to Gilles again and tell her the problem has been solved. This completes the quest.

The quest name is a reference to The Sound of Music song, "Climb Ev'ry Mountain" (1959).