The clifftop shacks are part of a medium-sized camp, inhabited by super mutants, in the Capital Wasteland in 2277. They are located southeast of Oasis, and west of Vault 92.

The exterior consists a small, fortified plateau with three shacks on it, two of which can be entered. The plateau is accessible from its eastern side by an uphill path, and by a simple suspension bridge on its western side. The whole area is guarded by several super mutants, whose level is dependent on that of the Lone Wanderer. On higher levels, centaurs can also be present.

Multiple gore bags are found outside the northern shack. Next to it is a collapsed shack, with a kneeling wasteland captive in front of it, who can be rescued for a small reward. To the south is the second accessible shack.

The northern shack has a single room, which holds five more gore bags, as well as a plethora of ruined books spread all over. A skeleton is laying on a bloodied bed, the latter can be used for sleeping. Next to the bed are an ammo box and a footlocker, and underneath it is an Average-locked safe.

The southern shack has two rooms, a hostile super mutant is also present. Four makeshift bedding are found on the floor of the first room, along with an oven and a refrigerator. The second room has a dead raider on the bed, a dead wastelander near the dresser, and another lucky wasteland captive in between the two. An Average-locked safe is found on a wooden shelf near the southern wall.

The clifftop shacks appears only in Fallout 3. 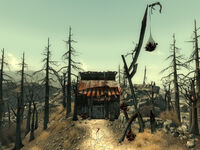 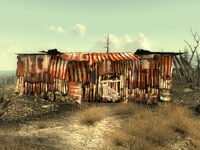 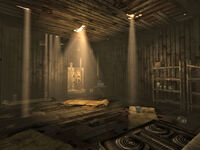 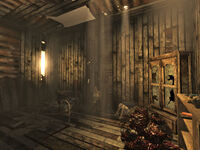