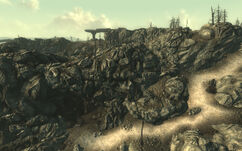 Cliffside cavern (referred to as raider outpost in-game) is a large cavern, east of Tenpenny Tower and directly west of Andale, which is inhabited by raiders and yao guai.

Cliffside cavern functions as a raider outpost in the southern portion of the Capital Wasteland, east of Tenpenny Tower and west of Andale. However, the raiders found out that they were not the only inhabitants of the cave and placed mines in front of the entrance to the yao guai cave.

Cliffside cavern can be accessed through two fence gate entrances. One is west of Andale in the direction of Tenpenny Tower at the bottom of a path down the hill. The other entrance is in a small but steep valley into the hillside north-northwest of The Overlook Drive-In, or northeast of the first entrance. It is secured by a hard lock.

The raider outpost section is a medium/large two-story cave that contains 12 raiders as well as a yao guai near the entrance to the yao guai cave. On entering the raider outpost from the steep hillside (north-northwest of the Drive-In), there is a tripwire attached to a shotgun which sits on the sideways fridges. Numerous beds, suitable for sleeping, can be found in the raider outpost section. The paths leading to both the locked fence gate and yao guai cave have mines scattered about and there are traps to be avoided throughout the area, including grenade and tripwire traps. The area of the cavern in the second northernmost room contains a tent and two beds (this is not the room with the entrance to the yao guai cave). Inside the caverns, exits to the Capital Wasteland are located at the southern and easternmost areas of the local map and the entrance to the cave is the northernmost area.

The yao guai cave section is a small two-story cave that is the second section in the cliffside cavern. Six yao guai inhabit this section and can be found wandering around the cave. At the entrance from the raider outpost, there are a couple of mines set down the path leading to the big area of the cave. There is a single main path that covers the entire cave with the exception of the lower level where it branches off into two smaller areas.

Cliffside cavern appears only in Fallout 3.

A bizarre desecration in the cavern's tunnel

Mini nuke
Add a photo to this gallery
Retrieved from "https://fallout.fandom.com/wiki/Cliffside_cavern?oldid=3349156"
Community content is available under CC-BY-SA unless otherwise noted.