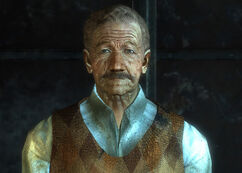 Father Clifford (born 2237) is the reverend of Saint Monica's Church in Rivet City in 2277.

Born in 2237,[non-game 1] Father Clifford is the head of Saint Monica's Church in Rivet City. His acolyte is Diego. He is the spiritual guide for the inhabitants of Rivet City, and provides council to citizens such as Mister Lopez, who visits the church frequently.[non-game 1]

Before 2277, Clifford came across Marcella, a Christian missionary from the Abbey of the Road. She was delighted to find another person in the wasteland as passionate about religion as she was. Clifford acts as a teacher and somewhat father figure to his acolyte, Diego.

Father Clifford has an acolyte, Diego, who he has taken care of since Diego was abandoned by his father. The bond they have is akin to father and son. He also frequently counsels Lopez, who is suicidal and will offer support and comfort during their interactions around Rivet City.

Father Clifford is normally seen in and around Saint Monica's Church but is known to roam around the inside of Rivet City talking to other residents. On occasion Father Clifford can be found in the Muddy Rudder, lecturing anyone present on the dangers of sin in the bar. Every Sunday he holds a mass, to which most of Rivet City's inhabitants attend.

The Sunday sermon is often glitched: either Father Clifford is not present at all, but non-player characters shush each other because he is speaking, or he will be present, but not speaking. It is advisable to go to church before starting A Nice Day For a Right Wedding, as the Sunday sermon seems to get stuck because of a bug in that quest. [verified]