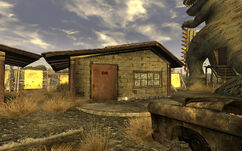 Cliff Briscoe's bungalow is a building in the town of Novac. It is the home of Cliff Briscoe, owner of the Dino Bite gift shop. His home is the house closest to the gift shop.

The bungalow consists of two rooms, including a living area and a bathroom in the northwest corner. On the west side of the main room is a kitchen area with a refrigerator. Shelving units line two of the walls. The remainder of the room is dominated by Dinky the T-Rex souvenirs, including several on the couch, stored on shelving units, covering the kitchen table, on a footlocker, and at the foot of Cliff's bed.

There are also two dinosaurs on top of rollerblades in what looks like a set up for a race with a tripwire in front. This tripwire does not activate anything, and can be disarmed for XP. Between the bed and the couch, there´s a shelf on the wall with a gun case.

Add a photo to this gallery
Retrieved from "https://fallout.fandom.com/wiki/Cliff_Briscoe%27s_bungalow?oldid=3450569"
Community content is available under CC-BY-SA unless otherwise noted.