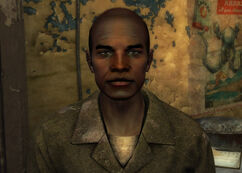 Come Fly With Me
One for My Baby

“Darn it. No one ever buys the T-Rexes.”

Cliff Briscoe is the owner of the Dino Bite gift shop in Novac in 2281.

He is fixated on selling the T-Rex and the rocket souvenirs, likely because he has a large number of them in stock. His shop inventory shows 1000 T-Rex souvenirs for sale for a single cap each. There are additional Dinky souvenirs in his house next to the gift shop, as well as in the storeroom behind him.

In fact, when the player character first meets him, Cliff will exclaim that the Courier has made it "just in time," with only a few T-Rex souvenirs left in stock for purchase, though the truth is that he has a ridiculous amount of them. He eventually admits that "no one ever buys the T-Rexes."