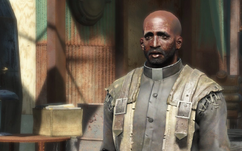 “We're always open. Anytime you need to sit and talk to whoever you think is up there.”

Pastor Clements is a pastor living within Diamond City in 2287. He can be found at the All Faiths Chapel near the main gate.

Clements made his way to Diamond City a while before 2287, with no intention of settling down. He was inspired by Diamond City's residents' search for a greater purpose though, building institutions such as a school and the chapel rather than merely focusing on survival, and felt like it was a good place to remain.[1] Clements is a believer in everyone being equal. This includes their religion. If anyone needs a house of worship, the All Faiths Chapel is open to everyone, though he cannot guarantee that he will know how to guide someone in their worship.

Pastor Clements appears only in Fallout 4.

Retrieved from "https://fallout.fandom.com/wiki/Clements?oldid=3289977"
Community content is available under CC-BY-SA unless otherwise noted.