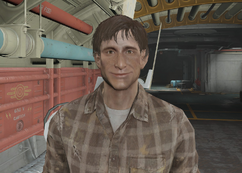 Clem arrives at the vault eager and happy to help with anything that needs doing. He mentions his mother often and isn't willing to blame her for anything. He is also liable to blame himself for certain experiments "going wrong" until being reassured he did them just fine.

* Only if assigned to eye device is he a doctor.

Clem appears only in the Fallout 4 add-on Vault-Tec Workshop.

When given a vault jumpsuit to wear, he may not equip it.[verified]

Clem waiting to be interviewed
Add an image to this gallery

Retrieved from "https://fallout.fandom.com/wiki/Clem?oldid=3109009"
Community content is available under CC-BY-SA unless otherwise noted.