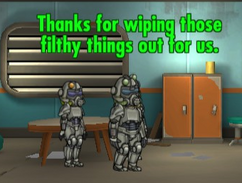 “There's a group of soldiers called the "Brotherhood of Steel" that insist the Vault would be an ideal outpost! To meet their standards, we're going to have to provide a little bit of fire support. We'll start at the nearby machine parts factory.”

Clearing a Path is an overseer quest and the first part of the Climbing the Ranks multi-stage questline in Fallout Shelter.

After arriving at the machine parts factory, the objective is given to clear a path for the Brotherhood of Steel squad at the factory. This is done by first clearing two mole rats in the second room. The third room will have no enemies. After taking the elevator and entering the fourth room, a legendary mole rat and two normal mole rats will engage the vault dwellers. After clearing this room, the Brotherhood squad will be encountered and a dialogue that completes the quest will follow. After the dialogue, the rest of the building can be further explored if wanted. The next room doesn't have enemies, while the first and second rooms at the top floor will have mole rats.

Other rewards
Add an image to this gallery
Retrieved from "https://fallout.fandom.com/wiki/Clearing_a_Path?oldid=2882121"
Community content is available under CC-BY-SA unless otherwise noted.