Clear out critters in Scum Pits for possible hydroponics lab 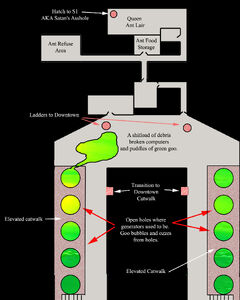 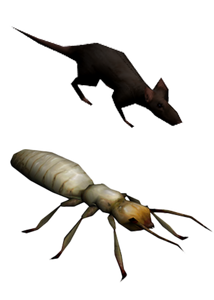 Clear out critters in Scum Pits for possible hydroponics lab was going to be a quest in Van Buren, the canceled Fallout 3 by Black Isle Studios.[1]

Farmer Dave has been ordered by Dodge to produce more wheat and corn for consumption as well as trade. The problem is, even with the new, hardier version of wheat and corn that the scribes were able to create; there just is not enough room on top of the generator buildings to grow more. The only solution is to build a hydroponics farm in the area known as the Scum Pits. The big problem there is that the Scum Pits are filled with all kinds of nasty critters. And if the critters are exterminated, then there is the problem of covering the toxic holes where the generators used to be and just building the farm. Dodge trying sending some of his men to clear out the critters, but the men never returned. And at this point, Dodge refuses to send any more of his men.

So, the player must do a few things here. The first is to clear out the critters in the Scum Pits, but to do that the player needs to do something for Billy-Bob in Baseline – he's the one who will unlock the access ports. The next is to find building materials that can be used to safely cover up the toxic holes and build out the hydroponics far. The materials can be caravanned from Denver once a working trade negotiation can be had, but the elimination of the critters is all up to the player's combat prowess. This quest is optional only.

Retrieved from "https://fallout.fandom.com/wiki/Clear_out_critters_in_Scum_Pits_for_possible_hydroponics_lab?oldid=3029558"
Community content is available under CC-BY-SA unless otherwise noted.