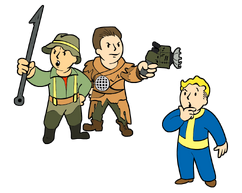 Cleansing the Land is a main quest and achievement/trophy in the Fallout 4 add-on Far Harbor.

Cleansing the Land is a quest that requires the Sole Survivor to destroy either Far Harbor by utilizing the wind farm kill switch code, or by using the nuclear launch key and thus destroying the Children of Atom at the Nucleus. Although destroying one of the two factions finishes the quest and grants the achievement Cleansing the Land, the player character can still choose to destroy both factions.

Both codes needed for the destruction are obtained in the previous quest Best Left Forgotten.

When choosing to destroy Far Harbor, one can optionally give the nuclear launch key to High Confessor Tektus. Do note that by doing this the player character can't go back and destroy the Nucleus as well, should they desire so. Tektus will praise them, but then urge them to destroy Far Harbor. To do so the Sole Survivor will have to visit the wind farm maintenance and enter the kill switch code in the Turbine 003 regulator terminal. This shuts down the wind farm, killing off the electricity needed to run the fog condensers around Far Harbor. As a result, Far Harbor will be engulfed in the fog and the creatures that come with it. A message will be displayed at this point that you are now an enemy of Far Harbor. After activating the code and returning to Tektus, the player character will receive Atom's Bulwark. If either The Heretic or Witch Hunt were resolved aggressively, one will receive the title 'Inquisitor' and the perk Inquisitor of Atom as rewards. If they resolved both quests peacefully, failed them, or avoided them altogether, they will instead receive the title 'Crusader' and the perk Crusader of Atom. Both perks have the same effects, and the difference is merely how some NPCs address the Sole Survivor. Then, Far Harbor itself will turn into ruins covered in fog and overrun by creatures, a legendary fog crawler being amongst them. Almost all Harbormen are dead, with only a few making a desperate last stand.

When choosing to destroy the Nucleus the player character will have to insert the nuclear launch key in the Vessel. Doing so will turn all Children of Atom hostile and will initiate a 30 second countdown upon which the submarine will go into lockdown, followed immediately by the launch of the nuclear warheads. As long as the key wasn't given to him, is also possible to convince Tektus through speech checks that it is the will of Atom to launch the nuke, which will allow the player character to leave the Nucleus without being attacked. The Sole Survivor has 30 seconds to leave the Nucleus. Once outside the building, one will be safe from the explosion. Once the Nucleus explodes, the player character will be given the perk Far Harbor Survivalist. Upon returning to Far Harbor there will be a commotion, with Harbormen gathering around and Captain Avery announcing that there was indeed a nuclear detonation and that all Children of Atom are dead. Allen Lee will react happily about the news, but Avery will insist upon a moment of silence.

When talking to Allen he will call the player character a hero and reward them with 1600 caps.

Retrieved from "https://fallout.fandom.com/wiki/Cleansing_the_Land?oldid=3457554"
Community content is available under CC-BY-SA unless otherwise noted.