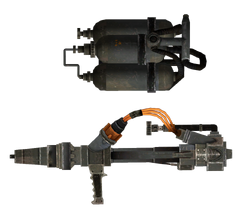 Cleansing Flame is a modified, high-capacity flamer. Unlike the standard variant, it has three jet nozzles, three large fuel tanks, and orange cables. The flame jet is blue rather than the usual red, indicating that the flame burns hotter than standard flamers.

Compared to the standard flamer, Cleansing Flame has superior overall damage and longer range. Its slightly lower base damage is offset by the burn effect that steadily improves based on the user's Energy Weapons skill.

Cleansing Flame can shoot a total of about 1495 times using standard fuel, the equivalent of 15 reloads, from full condition before breaking.

This weapon is the only GRA weapon that has an effect which scales to the player's skill level. 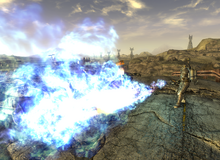