Clean out the Loan Shark 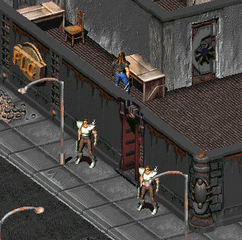 “I warned you never to come back here. Okay boys, you know what to do!”— Lorenzo Giovanni

Clean out the Loan Shark is a unmarked quest in Fallout.

It's possible to borrow money from Lorenzo Giovanni, the loan shark in the Hub. Once he refuses to lend any additional funds, he can be killed. If the Vault Dweller has the cash to front, they can have a net gain of 1,800 caps.

No one will interfere when killing Lorenzo, except for his guards, Guido and Leone. However, his guards may pose a threat to lower level player characters. Completing this side quest can be extremely lucrative as Lorenzo keeps many valuable items in his office such as 2,034 caps in the locker, frag grenades and guns in the bookshelf, in addition to the initial profit from the loan.

Retrieved from "https://fallout.fandom.com/wiki/Clean_out_the_Loan_Shark?oldid=3259065"
Community content is available under CC-BY-SA unless otherwise noted.