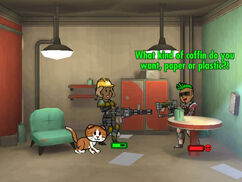 Rare weapon
Rare outfit
Rare/legendary junk item
Bottle caps
Nuka-Cola Quantum
“A group of Raiders that have been preying on the locals is using a Super Duper Mart as their headquarters. Time to take down their leader!”

Clean-Up on Aisle Five is a random encounter in Fallout Shelter. It can be triggered by any dweller who is exploring the wasteland.

It's very simple, three room location. First, three square long room is occupied by four Raiders. When the your dweller goes by elevators, in second, wide room you will encounter three more Raiders. Last, smaller room is being held by one Boss. Remember to use Stimpaks and Radaways at the end.