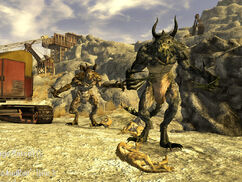 “I can't believe that an entire pack moved into the quarry. I thought that kind of bad luck only happened in New Vegas.”— Chomps Lewis

Claws Out[1] is an unmarked quest in Fallout: New Vegas.

Head to the quarry, and kill both the alpha male and the deathclaw mother. The mother is with the youngsters at all times. The targeted deathclaws must be killed. Then the Courier can return and get their reward.

Retrieved from "https://fallout.fandom.com/wiki/Claws_Out?oldid=3169248"
Community content is available under CC-BY-SA unless otherwise noted.