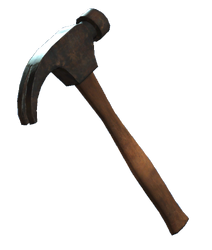 Sold to Calvin Whitaker for 15 caps

A claw hammer is a junk item in Fallout 4 and Fallout 76.

The claw hammer is a tool primarily used to pound nails into various objects or structures. The claw on the head of the hammer is meant for extracting nails embedded into an object. Claw hammers are relatively rare and almost nonexistent in the Commonwealth, the most common variant being the ball-peen hammer. It can be sold to Calvin Whitaker for 15 caps.

The claw hammer can be broken down into its individual components for use in crafting:

Retrieved from "https://fallout.fandom.com/wiki/Claw_hammer_(Fallout_4)?oldid=3124608"
Community content is available under CC-BY-SA unless otherwise noted.