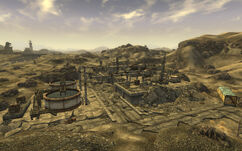 “Jason has mentioned some industrial ruins to the east that are supposed to be highly radioactive.”— Chris Haversam

Clark Field is a location in the Mojave Wasteland in 2281. The pre-War industrial facility is located south of the toxic dump site and east of the Highway 95 Viper's encampment.

The location is comprised of a small power plant and nuclear storage site bombed long ago, with containment reactors slowly leaking out radiation. Clark Field now sports broken concrete and the corpses of those who have succumbed to radiation poisoning or the pack of golden geckos that infests the site.[1]

The area consists of a highly irradiated industrial complex, with only the exterior accessible to the Courier. Several golden geckos roam the area. A small, fenced-in area on the southeast edge of the location is not irradiated and a white "NAC" container with a skeleton and some loot lying next to it can be found.

Near the south entrance from the highway is a dead pack brahmin. One of two isotope-239 igniting agent containers lay on the ground nearby, required for the quest Come Fly With Me. When approaching from the north, a deceased prospector named Mr. RADical can be found along the side of the road. He is wearing a radiation suit and the second isotope-239 igniting agent is found on his corpse, along with his journal.

View from the west

View from the northwest
Add a photo to this gallery

Retrieved from "https://fallout.fandom.com/wiki/Clark_Field?oldid=3435866"
Community content is available under CC-BY-SA unless otherwise noted.