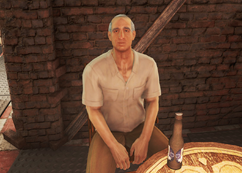 Clarence Codman is a businessman living in the upper stands of Diamond City in 2287, descended from the oldest family in the settlement. He and his wife own Diamond City's orchards, as well as the Codman family farms which supply meat to Choice Chops.[1][2]

Clarence can often be found outside in front of the Colonial Taphouse, and occasionally inside the Taphouse itself. He will talk about the poorer residents of Diamond City in a degrading manner and refer to them as the "filth down in the lower houses."[3] If the Sole Survivor talks to him in the stands he will be friendly towards them, mentioning how fearless they were to walk "right up into the stands." He then proceeds to give advice on how similar confident and unapologetic attitudes earned his family their fortune.[4]

Depending on actions the Sole Survivor takes in The Devil's Due, Clarence will be the recipient of the deathclaw egg omelette, praising Wellingham for the quality of the meal.[5] He will express sadness if Wellingham is killed, wondering who will take over the Colonial Taphouse.[6]

Clarence Codman appears only in Fallout 4.

Retrieved from "https://fallout.fandom.com/wiki/Clarence_Codman?oldid=3382473"
Community content is available under CC-BY-SA unless otherwise noted.