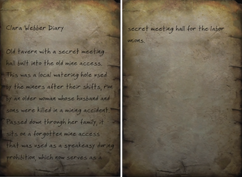 Clara Webber diary is a paper note in Fallout 76.

The note can be found in the basement of the Rusty Pick, next to Mick Flanagan's terminal.

Old tavern with a secret meeting hall built into the old mine access. This was a local watering hole used by the miners after their shifts, run by an older woman whose husband and sons were killed in a mining accident. Passed down through her family, it sits on a forgotten mine access that was used as a speakeasy during prohibition, which now serves as a secret meeting hall for the labor unions.

Retrieved from "https://fallout.fandom.com/wiki/Clara_Webber_diary?oldid=3221403"
Community content is available under CC-BY-SA unless otherwise noted.