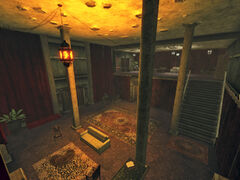 Clanden's room in the Gomorrah suites

“Blowing shit up, of course. Thing is, they don't need things to blow up, they need people to die in a fairly large area in a fairly small timeframe.”

Clanden is a mercenary; a proficient bomb maker and snuff pornographer contracted by the Omertas for their plan to take over the New Vegas Strip. He lives in a suite at the Gomorrah casino in 2281.

Calm and more or less normal to the casual observer, Clanden nonetheless manages to unnerve people with his apparent purity, as he does not enjoy prostitutes or drugs, not even at the Gomorrah.[1] Despite that, he's a special guest of the leaders of the Omertas, Nero and Big Sal, who need his services to carry out an attack on the Strip for Caesar when he attacks the dam, so that they can distract the NCR Army.

Clanden's expertise with explosives allows them to engineer a big enough attack to force the Republic to respond and weaken their positions at Camp McCarran. Since he has to engineer a way to kill many people in a large area relatively quickly, he settled on a gas attack, using chlorine obtained from the rival Ultra-Luxe.[2]

In return for his services, Clanden is provided with caps, a luxury suite, and fodder for his single vice, misogynistic sadism. He delights himself in inflicting pain and suffering on women, first raping them violently, then murdering them in visceral ways, all the while recording the whole process on holotapes for later use.[3] This being Gomorrah and the Omertas, there is no shortage of victims to fuel Clanden's atrocities and both of the leaders are more than willing to sacrifice them in return for Clanden's expertise.

The Gomorrah prostitute may be found alive, standing inside the locked room. This appears to be the case especially if the player character has picked the lock to the room instead of opening it with Clanden's looted key. She will greet the Courier, utter random phrases, and even wander out into the hallway. Attempting to speak with the "corpse" will still prompt for the Medical skill check. She will still respawn even after being completely dismembered. [verified]

A dead prostitute on the table, after being tortured by Clanden