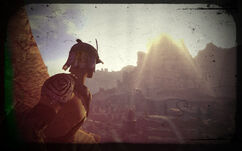 Tell Follows-Chalk to stay with his tribe or that he should see civilization.

“Let me tell you a story. When I was a boy, a man came through the valley with one of the caravans. The man explained that he went from place to place and sang for people, who gave him food and shelter and care in return. I couldn't believe there was a place where on this world where a man could do that. I promised myself then that one day I'd explore that world myself.”— Follows-Chalk

Civilized Man's Burden is a side quest in the Fallout: New Vegas add-on Honest Hearts.

After completing the quest Tourist Trap, a new dialogue option opens up with Follows-Chalk regarding his interest in seeing civilization. If asked, Follows-Chalk says that one day a "man with a big mustache and guitar" came to the Dead Horses camp. Follows-Chalk goes on to say that he was intrigued by the man's professed occupation; traveling the wasteland as a wandering entertainer, being paid simply to make music. If the Courier has met the Lonesome Drifter, they can comment that they know who Follows-Chalk is talking about, and depending on if the quest Talent Pool has been completed, the Courier can remark that they got him a job[1], or if Talent Pool hasn't been completed simply that it's a small world.[2]

Follows-Chalk then confesses that he is afraid to ask Joshua Graham for advice about whether or not he should see civilization for himself, and asks the Courier to speak with Joshua on his behalf. When asked, Joshua states that he does not wish to interfere further in Follows-Chalk's decisions, leaving it to the Courier to provide guidance one way or the other. The Courier can then either lie to Follows-Chalk about what Joshua said, or tell the truth and provide their own opinion of whether Follows-Chalk should stay in Zion for his family's sake, or see more of the world. Regardless of using the lie or truth Speech options, the outcomes are the same for Follows-Chalk based on the implied "go" or "stay" option given.

If Follows-Chalk is advised to explore civilization, his ending involves returning to Dead Horse Point, then quarreling with his family and other tribe members about his ambitions. "One morning, they awoke to discover that Follows-Chalk had set off alone, westward, into the wilderness. He was never seen again."

If Follows-Chalk stays with his tribe, his ending involves his life after remaining in Zion. "Though he sometimes dreamed of distant lands, he continued to support his family at Dead Horse Point, and eventually his wanderlust faded."

The name of this quest references Rudyard Kipling's poem "The White Man's Burden," which was written by him to encourage the American people to assume colonial control of the Filipino people and their country.

Retrieved from "https://fallout.fandom.com/wiki/Civilized_Man%27s_Burden?oldid=3352011"
Community content is available under CC-BY-SA unless otherwise noted.