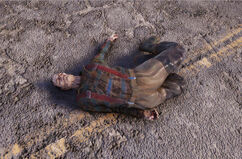 The Civil War reenactor is a corpse found during the random encounter Philippi's Cemetery Battlefield Revealed. On his body, a holotape by Dick Shale can be found. Reading it reveals the Philippi Battlefield Cemetery location.

Civil War reenactors are hobbyists who seek to recreate the appearance of Civil War battles and other elements of life during the American Civil War. This particular reenactor was on his way to visit the Philippi Battlefield Cemetery, the location of the first land battle during the War.

The Civil War reenactors appear only in Fallout 76.

Retrieved from "https://fallout.fandom.com/wiki/Civil_War_reenactor?oldid=3174200"
Community content is available under CC-BY-SA unless otherwise noted.