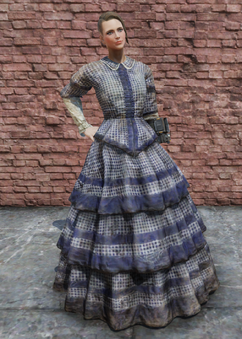 The Civil War era dress is an outfit in Fallout 76.

An outfit modeled on the type of dresses worn during the American Civil War of the 1860s. The outfit consists of a layered dress which includes a white long sleeve shirt, a blue and white checkered blouse, and a long blue and white checkered terraced skirt. The boots hidden by the skirt are black with very long laces. The sleeve on the left arm is rolled up to make room for the Pip-Boy 2000 Mark VI.

Retrieved from "https://fallout.fandom.com/wiki/Civil_War_era_dress?oldid=3482754"
Community content is available under CC-BY-SA unless otherwise noted.