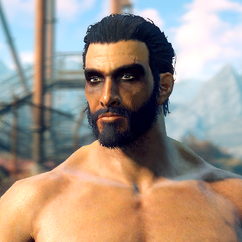 “You betray Cito?! You enemy now!”

Cito, short for Marcosito,[1] is a wild man living in the Safari Adventure park of Nuka-World in 2287.

Cito was the son of Marcos and Imelda, two scavengers who were killed by super mutants when he was still young. His father was killed quickly but his mother escaped long enough to write a note asking the reader to look after her son before she succumbed to her injuries.[1] He wandered for a time, before coming to the Safari Adventure park at Nuka-World, and was then raised by the ghoulrillas there.

Safari Adventure: Cito wishes to, with the Sole Survivor's aid, rid the park of the gatorclaws running loose throughout the place. He and his family will present one final obstacle before the park can be "liberated," however. The Sole Survivor can either tell him to leave, kill him or pass a Speech check to claim Safari Adventure.

Should the gang that gets assigned to Safari Adventure later turn against the Sole Survivor during Power Play, Cito along with his ghoulrilla family will disappear from the game.

Cito appears only in the Fallout 4 add-on Nuka-World.

Upon meeting him and choosing not to attack via interaction, Cito will become essential and turn hostile if he is attacked by the player character. [verified]

Retrieved from "https://fallout.fandom.com/wiki/Cito?oldid=3449975"
Community content is available under CC-BY-SA unless otherwise noted.