Take it Back!
Getting Ready for Prime Time

Fallout 3
“Stupid Scribe Rothchild and his stupid lab. All I wanted to do was talk to the robot and see if he'd be my friend. So what if he can't walk?”— Arthur Maxson

The laboratory is a section inside the Citadel.

The laboratory consists of an armory, a lab, the smithy, a restroom, and a mess hall.

The smithy is a section where Scribe Bowditch makes new weapons and repairs old ones.

The laboratory contains a map showing the locations of Vault 87, Vault 92, Vault 101, Vault 106, and Vault 108. With the Broken Steel add-on, after completing Take it Back!, the map has additional markers for Raven Rock, the Jefferson Memorial, and the Rockland car tunnel. The map also contains unnamed markers denoting Scrapyard, Roosevelt Academy, Broadcast tower LP8, and a location north of Charnel house, all random encounter spawn locations.

The laboratory appears only in Fallout 3. 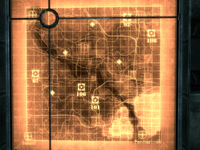