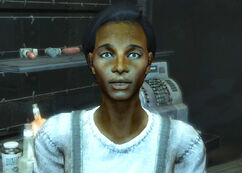 “This is A Quick Fix. I mean, that's the name of our shop. Paulie and mine that is. My name is Cindy. Cindy Cantelli.”

Cindy Cantelli is the operator of A Quick Fix in the year 2277.

Cindy runs A Quick Fix, which sells chems. Cindy has given up on her addict husband, Paulie Cantelli. They go through the tired motions of a marriage without really interacting with each other. She never uses chems herself, although she has no problem selling them to others. She has what is called a convenient morality. Currently she has a crush on Bannon but has not gotten up the courage to approach him. However, since he is a regular churchgoer, she is there every Sunday, sitting as close to him as possible.[1]

She is fond of Bannon and enjoys sitting next to him and talking to him at church and at meals. The Fallout 3 Official Game Guide states she has a crush on him.[1]

If she dies, Paulie will begin running the shop. If Paulie dies, she will say "Thank God!"

Cindy Cantelli appears only in Fallout 3.

Retrieved from "https://fallout.fandom.com/wiki/Cindy_Cantelli?oldid=3244165"
Community content is available under CC-BY-SA unless otherwise noted.