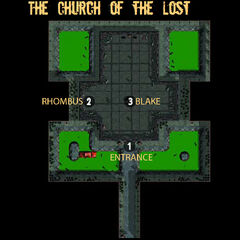 Church of the Lost map

The Church of the Lost is a ghoul religion in the city of Los.

The majority of the city's population are members of this cult, dedicated to guarding the secret vault from the outside world and to eradicate all humans and super mutants that happen across their holy ground. Their leader and spiritual guide is Blake.

The Church of the Lost is indeed a powerful force. The ghouls have access to some advanced weaponry, such as laser weaponry, and they use glowing one comrades, poison dogs, and even suicide bombers to fight their enemies.

The Church of the Lost consists not only of pre-War ghouls, but also ghouls who were turned after the war. Some of the members, including Blake himself, have been ghouls for little over 20 years, created by the explosion in the secret Vault from which they originally came.

The Church of the Lost appears only in Fallout: Brotherhood of Steel.

Retrieved from "https://fallout.fandom.com/wiki/Church_of_the_Lost?oldid=2594797"
Community content is available under CC-BY-SA unless otherwise noted.