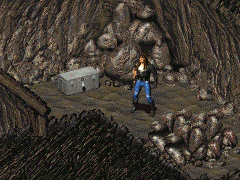 “Oh no! I've slept so long the world has turned stupid! Aieeeeeeee! ::he flees in panic::”

Chuck Stodgers is a man, lost in time, found in the Broken Hills mine in 2241.

Chuck Stodgers was "the greatest airplane pilot in the world," until he crashed. After the crash, he staggered into a cave in Broken Hills to escape the explosion. He was overwhelmed by the fumes, however, and fell asleep. He is a dusty, sleepy-looking man with clothes that look very, VERY old fashioned.[1]

When the Chosen One explores a rock formation to the right of the mine entrance, he accidentally finds a hidden cave with a dusty, sleeping man wearing old-fashioned clothes inside. Chuck Stodgers, who has been asleep there for a long time, thanks to the unique effects of local fumes, is woken when the Chosen One approaches him. The Chosen One is given a chance to talk to him, and inform him of what year it is, sending him into a blind panic.

Chuck Stodgers appears only in Fallout 2.

Chuck Stodgers is a reference to the Armageddon 2419 A.D. character Buck Rogers. Both were trapped behind rocks in a mine where they were preserved for many years.

Retrieved from "https://fallout.fandom.com/wiki/Chuck_Stodgers?oldid=3341222"
Community content is available under CC-BY-SA unless otherwise noted.