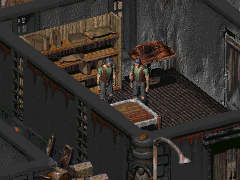 “Just get out before we smash you flat and turn you into drymeat.”

Chuck Dunton is one of the twins running a Klamath shop in 2241.

Chuck Dunton is a tall, heavily muscled man whose face, beneath his beetling brow, is habitually twisted into a bully's smirking scowl.[1] He is identical to his brother, Buck, to the point of using exactly the same phrases and mannerisms. They are the makers of their "world famous" Dunton meat jerky, made from old, rotten meat, flavored with spices, homemade sauce and choice boot scrapings from the pen.

They spend their nights in the Golden Gecko tavern, drinking and looking for people to wrestle. Their livelihood, though, are brahmin, or rather, stealing brahmin from farmers in the area, typically Torr Buckner.

Rustle the brahmin: The Duntons, aside from running a shop with overpriced items, can be wrestled with in Sajag's tavern for a drink and encourage them to rustle some brahmin from Torr Buckner.

Originally, the player character was supposed to be able to expose them with the radscorpion limbs found in a shack on the brahmin pastures map, but this feature was cut from the final game.

Chuck Dunton appears only in Fallout 2.

Retrieved from "https://fallout.fandom.com/wiki/Chuck_Dunton?oldid=3341218"
Community content is available under CC-BY-SA unless otherwise noted.