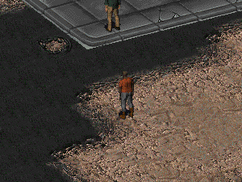 It is possible to get an extra Luck point when talking to Chuck the first time, then asking for advice. This only works as long as Chuck is not asked about his job until after receiving the Luck bonus.

Retrieved from "https://fallout.fandom.com/wiki/Chuck_(Fallout)?oldid=2713158"
Community content is available under CC-BY-SA unless otherwise noted.