Chryslus Corvegas are a series of Corvega brand vehicles produced by Chryslus Motors Corporation before the Great War.

Corvega was the flagship brand of Chryslus Motors and one of the dominant forces on the automotive market after the resource crisis rendered combustion engines largely extinct. The price of an old model Corvega in 2077 was $199,999.99 - despite that, they remained extremely popular. However, despite their popularity, standards of manufacture seem to have deteriorated, with coupes manufactured in 2077 having a tendency to leak coolant.[1] 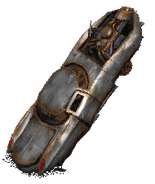 Wrecked Original Corvega on the wall of Junktown in Fallout

Wrecked two-door Corvega on the wall of Junktown in Fallout

A pre-War Corvega from Fallout 4's the Wanderer trailer

Frontal view of a wrecked Corvega in Fallout 4

Corvega, Loading screen
Add an image to this gallery

Retrieved from "https://fallout.fandom.com/wiki/Chryslus_Corvega?oldid=3278422"
Community content is available under CC-BY-SA unless otherwise noted.