The Chryslus Cherry Bomb was a sports car produced by Chryslus Motors[Non-game 1][2] prior to the Great War.[1]

The Cherry Bomb is a single-seat, commercial-grade vehicle whose design is dictated by one desire: To break the sound barrier. Every aspect of the car is tuned towards that goal, with a body designed to minimize air resistance without losing traction, and a single-piece cockpit to minimize turbulence. Although promoted in cherry red paint, it was also available with light blue, mint green, yellow, and black paints, each with a joystick for steering and onboard screen.[1]

Powered by a 950 horsepower atomic V8 engine, it was capable of accelerating from 0 to 60 miles per hour (96 km/h) in 0.3 seconds, and reaching top speeds "once reserved for Army Space Troopers". The flexi-glass dome is rated not only as shatter-proof, but also capable of stopping small arms fire, making it safe "from the golden fields of Oklahoma to the streets of downtown Boston".[Non-game 1]

The Cherry Bomb is commonly found on the East Coast, with 216 found in the Boston metropolitan area, 27 on Mount Desert Island, and five in the ruins of Nuka-World, one of which is perfectly preserved car in Bradberton's private vault.[3] The Cherry Bomb was prolific in Appalachia, with a total of 256 found in several variants across the region.[4] Specific locations include:

The Cherry Bomb appears in Fallout 4.

Remnants of a yellow Cherry Bomb

In the driveway in the Sanctuary Hills 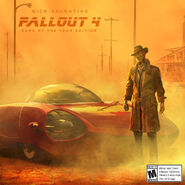 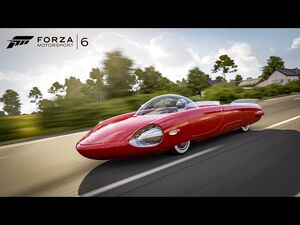