The Chryslus Building is a ruined office building located in the Capital Wasteland in 2277, on the outskirts of Washington, D.C.

It was the head office of Chryslus Motors, the automobile manufacturer from before the Great War of 2077. At the time, Chryslus was promoting the $199,999.99 Corvega.[1] In the years since the War, it has become a stronghold for super mutants and centaurs.

Right behind the building itself, there is a baseball field, and in it, two raiders will spawn. One, on the pitcher's mound, will be equipped with frag grenades and the other, on the home plate, with a baseball bat. They don't actually throw and hit the grenades but just stand there till they detect and attack the Lone Wanderer. The raider with the baseball bat will sometimes run around the bases, bat in hand. There are two repeatable type-B random encounter triggers on the outside area of the building.

The lower offices also have two floors; the upper one has some offices, the lower is simply a storage room. There are large holes in the floor everywhere. The basement has a cantina, kitchen and some storage shelves.

Chryslus Building appears only in Fallout 3. 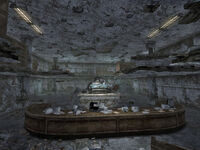 Battering ram trap on the 2nd floor of the reception area

Big Book of Science in the basement