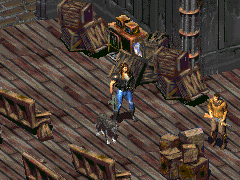 Find out who was responsible for Richard Wright's overdose

“You find out who killed my brother, and all of Family Wright'll be thanking you. And that's no small thanks, understand?”

Christopher "Chris" Wright is one of Orville Wright's sons.

A tall man with a rebellious attitude, mohawk and a lot of leather and chains describe Chris pretty well.[1] He has a direct, blunt manner of speaking, although, despite his attitude, he cares deeply for his family and takes no crap from anyone, not even slavers or childkillers.

Find out who was responsible for Richard Wright's overdose: The Chosen One can get a recommendation from him in order to work for his father, which means being able to meet Mr. Wright without too much hassle.

Christopher Wright appears only in Fallout 2.

Retrieved from "https://fallout.fandom.com/wiki/Christopher_Wright?oldid=3404042"
Community content is available under CC-BY-SA unless otherwise noted.