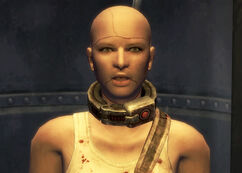 She eventually tracked him to the Sierra Madre Casino, where she was captured by his slave, Dog, and forced to work for him in breaking into the Sierra Madre while fitted with an explosive collar. At some point, she was also locked in an Auto-Doc in the Villa's Medical District by Dean Domino, where her vocal cords were torn out. The Auto-Doc repeated the procedure for two weeks in which Christine eventually developed claustrophobia as a result. She later regains the ability to speak when the operation is completed by the Auto-Doc in Vera Keyes' hotel room. However, the procedure replaced her old voice with Vera Keyes'. It is then revealed that her capture was part of Domino's plan to break into the casino's vault, as the elevator could only be activated by the voice of the long-dead Keyes.

Add an image to this gallery
Retrieved from "https://fallout.fandom.com/wiki/Christine_Royce?oldid=2790306"
Community content is available under CC-BY-SA unless otherwise noted.