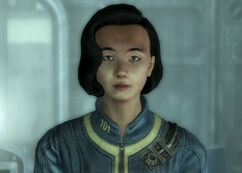 Christine during Trouble on the Homefront

9 (during Growing Up Fast)

16 (during Future Imperfect)
19 (during Trouble on the Homefront)

& Future Imperfect:
Helps nobody
Trouble on the Homefront:
Helps friends and allies

Vault101Faction (only Future Imperfect & Trouble on the Homefront)
Growing Up Fast:

“Terrible! I can't believe I have to share a dorm with old lady Palmer. How creepy is that?”

Playing up to her father usually results in a verbal ear-bashing or worse, so Christine has recently become more and more introverted. She's not happy in Vault 101 and wonders what life is like away from the concrete walls and fluorescent buzzing lights.[1]

At the G.O.A.T., Christine expresses her mother's desire for seeing her oldest daughter in either science or home economics.

On August 3, 2274, before the achievement test, if the player character speaks with her, Christine will ask why they are speaking to her. After completing the test, Christine turns it in. Edwin Brotch, the teacher, informs this student that she will be working in the maintenance department with Stanley Armstrong and that he would be certainly pleased. She is infuriated and says that she will tell her father about the result, having an expectation that he will change her job assignment. Interacting with her after the G.O.A.T. sometimes makes her blurt that Mr. Brotch is a "big fat liar."

She is a daughter of John and Mary Kendall. Christine's younger sibling is Monica.

Christine Kendall appears only in Fallout 3.

Christine as could have been seen during Growing Up Fast

Gossip seen in the classroom
Add a photo to this gallery

Retrieved from "https://fallout.fandom.com/wiki/Christine_Kendall?oldid=3238804"
Community content is available under CC-BY-SA unless otherwise noted.