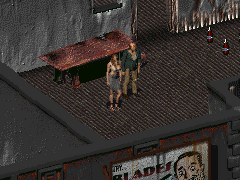 “Michael and I just moved here, so I haven't seen much of the area. I've heard about a large church to the South, but it sounds mostly like rumors.”

Christine is a member of the Blades in the Boneyard in 2161.

A member of the Blades, Christine is described as a very beautiful young woman. She is married to Michael, whom she can be found next to.

Asking Christine "Is there anything else I should know?" will inexplicably result in this unique dialogue with the Vault Dweller:

The letters are crude phonetic spellings of words. To "decode" this message, simply read the lines out loud, and the message becomes:

Player: Them are not ducks.

Christine: Oh yes them are! / See the itty-bitty wings?

Player: Why I'll be! Them are ducks!

(There are seven little "ducks" around Dugan.)

Christine appears only in Fallout.

Retrieved from "https://fallout.fandom.com/wiki/Christine_(Blades)?oldid=3355442"
Community content is available under CC-BY-SA unless otherwise noted.