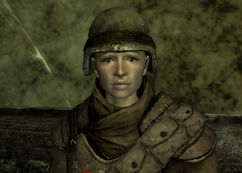 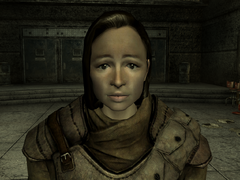 Christina without her helmet

“Not your problem. Right. That's the motto in this town. Rotten people, rotten place.”

Private[1] Christina Morales is a trooper in the New California Republic Army and the wife of the late Ranger Esteban Morales. She is stationed at Camp McCarran in Fallout: New Vegas.

Sitting distraught in the Camp McCarran concourse, Private Morales has been crying over the death of her husband, Ranger Morales, who was recently killed by a group of Fiends near REPCONN headquarters, while laying down covering fire for other troops in his group. Wounded by enemy fire, he slowly bled out on the hot, cracked asphalt as the Fiends chased his squad away, halfway to McCarran.[2] Esteban's death is a heavy burden to bear, but the inability to give him a proper burial is even heavier.[3]

Christina is left in despair, thinking about her husband's body slowly cooking in the desert sun, desecrated by the Fiends. Though the NCR promises that no man is ever left behind,[4] the Fiends set up a kill zone around Esteban's body. Soldiers would only get killed trying to get through the mines and snipers.[5] Regardless of the danger, Esteban's best friend, Ranger Thomas Jackson offered to attempt a retrieval without approval from his commanding officer, but Private Morales tells the Courier that he has not come back yet either.[6]

A Final Plan for Esteban: She asks the Courier to retrieve her husband's corpse and bring it to a nearby NCR outpost, so it can be shipped back to California for burial.

Retrieved from "https://fallout.fandom.com/wiki/Christina_Morales?oldid=3291779"
Community content is available under CC-BY-SA unless otherwise noted.