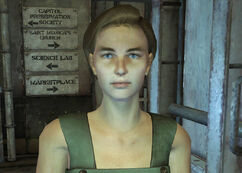 “Oh, I don't know about that. For all I know, it's had survivors on it since the war. I'm just thankful it's here! Maybe if you ask Bannon. He's been simply wonderful on the council, so I'm sure he'd be glad to help with your question.”

Christie Young is a cleaning lady in Rivet City in 2277.

Spending her time on the upper deck where she rests and cleans the expansive vessel, Christie is Henry Young's wife, and C.J.'s mother. She's not a huge fan of her daughter's friendship with the lower deck dwelling James Hargrave but is hoping that her C.J. will have a calming influence on the wayward young man.[1]

Christie is married to Henry Young and together they have a daughter, C.J.

She can be heard screaming in her sleep.

Christie Young appears only in Fallout 3.

Retrieved from "https://fallout.fandom.com/wiki/Christie_Young?oldid=3185801"
Community content is available under CC-BY-SA unless otherwise noted.