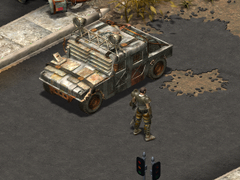 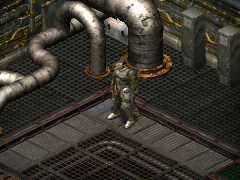 “It's about God-damned time some fucking backup showed up. *Sigh* Alright, the original escort squad is pushing up mutated daisies. Everyone in this God forsaken town wants what's in these supply vehicles. It's not a pretty situation here. Every twenty feet is another shitty roadblock that has to be cleared. These people are vile and little more than animals. So shoot first and watch your back. The keys are in it. Good luck and I'll see you back at the base.”

Christian, real name Wilson, is pilot specialist in the Brotherhood of Steel in 2197.

Christian could be seen earlier in the game in Bunker Alpha, but the Warrior comes in contact with him only when he needs help during the Macomb incident, when he and his car (which is filled with essential weapons, food and medicine) were cornered and blocked by raiders and mad civilians. The Warrior arrived with his team and took the car from Christian, eventually leading it through Macomb, escaping the trap. Christian successfully escaped Macomb and returned to the Brotherhood.

Christian initially was named Wilson but later was renamed because of Phillip Wilson, a librarian.

Christian appears only in Fallout Tactics.