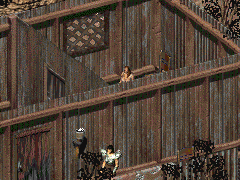 “If you're here to try and rape me, you're going to be wearing your balls as a bow tie. Get it?”

Chrissy is a young woman appearing in Fallout 2 as a New Khans hostage.

Chrissy is a pretty young woman who looks confident and able to handle herself in a fight.[1] She lives in the Squat above Vault 15 with her mother, Rebecca. She is curious, short-tempered and can hold her own in a fight, making her an unlikely victim.

Shortly before the Chosen One comes by the squat on a mission for the NCR, Chrissy is kidnapped by the New Khans raiders currently occupying the vault when she sees some things she is not supposed to see.

Phil says that they had been "having some fun" with Chrissy. Their attempts, however, seem to have been less than successful, as some of the New Khans say that they still hurt after she kicked them.

Retrieved from "https://fallout.fandom.com/wiki/Chrissy?oldid=3176172"
Community content is available under CC-BY-SA unless otherwise noted.