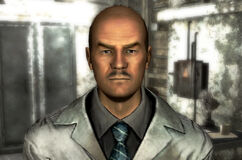 “I'm the flock's resident engineer. I've always been good with machines. Jason says the Great Journey would've been impossible without me.”

Chris Haversam is an engineer living in the REPCONN test site in 2281.

Chris Haversam grew up in Vault 34 and was assigned as the vault reactor engineer due to his technical aptitude (and preference for machines that don't shoot people, which made him a preferred pick over fellow engineers Houser and Mitchell.) He believed the radiation he would absorb from his many visits to the vault reactor would turn him into a ghoul, although most of the management dismissed his claims as neurotic.[1]

Eventually, his hair began falling out due to natural reasons, but Chris insisted he was becoming a ghoul due to radiation from the Vault reactor and subsequently left the Vault.[1][2][3][4] The vault descended into chaos shortly after his departure, when the reactor became unstable and began leaking dangerous radiation, turning most of the residents into actual ghouls.

Believing himself to be a ghoul, Haversam joined the Bright Brotherhood in 2279.[5] He could not be convinced that he was a human, so Jason Bright decided to accept him into his congregation believing him to been sent by the creator to ensure the success of the "Great Journey." Bright also believes that Haversam is blessed with ignorance: both that he is not a ghoul and that he cannot join them on their journey.[6] There is no malice in this decision, however: they would take him if they could.[7] With his technical expertise, Chris was made the engineer in charge of the entire project to accomplish their goal.[8][9]

Come Fly With Me: Chris sends the Courier to find Isotope-239 igniting agent and thrust control modules so the ghouls' rockets can take off.

The player character can convince Chris that he is indeed human with a Speech check (50) or with the Black Widow perk, and the rest of the Bright Brotherhood needs to leave him behind. The Courier is given the choice to help him sabotage the rockets so the ghouls die in flight. Alternatively, they can convince Chris not to sabotage the rockets, and he will send them off with no hard feelings before heading for Novac.