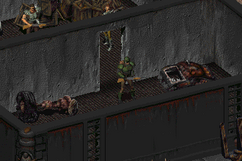 “What do you want?
A donut.”— Chris Avellone and the Vault Dweller

Chris Avellone is, around 2161, the most feared bounty hunter in the Wastes.

Chris Avellone and his entourage hunt down transgressors for profit and thrill. He has an abrupt attitude and is serious about his money. He detests child killers and any annoying people for that matter.

This Chris Avellone appears in Fallout and is mentioned in the Fallout Bible.

The character was named after Chris Avellone. According to the Fallout Bible:

“It's just a joke from Jess Heinig, one of the programmers. It's one of the five billion developer in-jokes in Fallout 1 and 2. The fellow [Avellone] has no past, and no future.”

Also, a possible joke[1] of how Interplay wasn't paying him enough (or at all) is referenced.

Retrieved from "https://fallout.fandom.com/wiki/Chris_Avellone_(Fallout)?oldid=3139253"
Community content is available under CC-BY-SA unless otherwise noted.