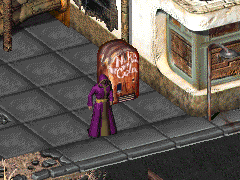 Chris is a disguised, undercover Enclave guard who can be found at the gas station, guarding the entrance to Navarro in 2241.

Chris is an old man[1] who is the sentry and overwatch radioman at the Navarro gas station, posing as a gas station attendant. His role is to dissuade travelers from proceeding ahead towards the base, as well as receiving fresh recruits from other Enclave bases in the area of operation.

Chris appears only in Fallout 2.

Retrieved from "https://fallout.fandom.com/wiki/Chris_(Fallout_2)?oldid=3248644"
Community content is available under CC-BY-SA unless otherwise noted.