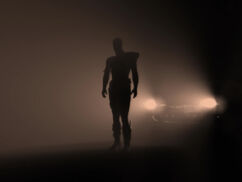 “You survived. The Chosen One cannot be weak or we are all doomed. Are you prepared for your quest?”— Arroyo elder after the Temple of Trials

The Chosen One,[Non-game 1] is the player character in Fallout 2, and the grandson of the Vault Dweller.

The bloodline of the wasteland's most influential tribesman, extends all the way back to the Vault Dweller and his spouse, Pat. As the son of the village elder, the Chosen One is a member of the third generation of former Vault 13 dwellers living outside the Vault, similar to how his grandfather was the third generation to live in a Vault.

The Chosen One was trained from birth to become the tribe's champion, and, in the future, their elder. Part of these trials were drug sessions with Hakunin, with the final stage of the Chosen One's development being the Temple of Trials; a trial the Chosen One's mother had also completed long ago. After completing his training, the Chosen One was sent out by the people of Arroyo to find a Garden of Eden Creation Kit, which was believed to have the power to make the failing village thrive once more.

Exploits in the Wasteland

In the course of the Chosen One's journey, he changed the wasteland in many ways, both great and small. His exploits brought excitement to the boring Klamath,[2] he ruined Rose's unique cuisine in Modoc (by shooting her deathclaw in the eye, no less)[3] and earned the friendship and protection of John Cassidy.[4]

In his travels further south, he exposed the Broken Hills' anti-mutant conspirators' attempt to rid the town of super mutants, thereby earning the loyalty and friendship of the sheriff, Marcus, who joined him on his quest.[5] In New Reno, he sired an illegitimate son, who would eventually become the feared and powerful leader of the Bishop crime family.[1]

Some of his most important deeds took place in Shady Sands, once he entered NCR lands. By killing Darion, leader of the New Khans, he arranged for the Vault 15 squatters to voluntarily join the NCR. This proved that President Tandi's policy of peaceful expansion can be successful, which resulted in a campaign for the NCR's further expansion.[6]

Eventually, the Chosen One found the G.E.C.K. in Vault 13, but he also discovered that there was more at stake than just the future of his village. The Enclave, a vicious para-military organization formed from select members of the pre-War government and the military-industrial complex, abducted the tribals of Arroyo, in order to develop a biological agent capable of wiping out the entire human race, outside of those specially inoculated.

His journey to defeat the Enclave took him to Navarro, where is was documented that he infiltrated the military base, where he was caught by its drill sergeant without the Enclave's regulatory uniform. Taken for a fresh transfer, he was given the world's loudest berating.[7] While there, the Chosen One freed Xarn,[Non-game 2] killed the Enclave scientist Dr. Schreber, and repaired a cyberdog named K-9; later leaving him under the care of a mechanic named Dorothy.[Non-game 3]

The Chosen One reached the Enclave's headquarters (the ancient Enclave Oil Rig) through the use of an old tanker, the PMV Valdez. He destroyed the oil rig by triggering a meltdown of its reactor, and freed both his people and the captured Vault 13 dwellers, killing both President Dick Richardson and Frank Horrigan in the process.

With the G.E.C.K. in his hands, the Chosen One, along with the Arroyo tribals and the Vault 13 dwellers, founded the city of New Arroyo and reunited the two bloodlines that had been separated for three generations. The village elder, pleased with the reunion, found peace and passed away a few months later, leaving the leadership of the village to the Chosen One. With the combination of the Vault dwellers' technical know-how and the tribals' survival skills, New Arroyo thrived under the Chosen One's rule, and grew into a powerful civilization.[Non-game 4]

Inspired by the Chosen One's example, Marcus wandered east after Broken Hills dispersed, eventually founding Jacobstown in the Mojave Wasteland. He and the Chosen One would never hear from each other again, but if the Courier asks about The Chosen One, Marcus replies that he has has a feeling that everything worked out for him in the end.[8]

The Chosen One was also remembered by other individuals. While not being born at the time it happened, Klamath Bob still would tell stories about the tribal that visited the town of Klamath and stirred up the place,[2] and Cannibal Johnson would reminisce of his visit to Navarro.[7]

The Chosen One appears in Fallout 2 and is mentioned in Fallout: New Vegas and Fallout Bible.

Male Chosen One in a Vault 13 jumpsuit

Retrieved from "https://fallout.fandom.com/wiki/Chosen_One?oldid=3489446"
Community content is available under CC-BY-SA unless otherwise noted.